There are really two parts to the plumbing story of this tiny house.  One is the rather complex, but highly effective, way that the water on the land is captured and channeled from where it comes out of the ground and directed towards the house.  The plumbing within the house is more traditional RV style plumbing and the whole thing is still a bit of a mystery as to how well it will work when it's all done.

Let's start on the outside of the house.  The plumbing input is a standard connector that you can hook a garden hose up to (electrical 30AMP connector is on the left) 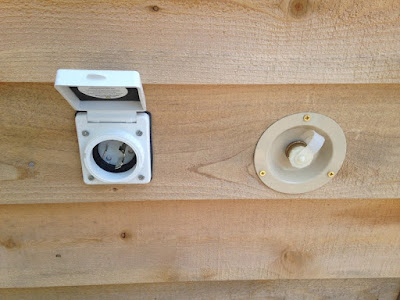 I got this piece off of Ebay for $15 or so. The back is a female connector that takes a 1/2" thread.  At this point on the interior I go over to a PEX system (I'll do a separate post on that) which in my view is really the best solution for a tiny house.  Sure you could do the whole thing in copper but it's so much easier to work with PEX. For the PEX, I initially went with 1/2" PEX hardware but came to realize (or imagine) that this might be overkill for my limited water needs.  I downgraded to a 3/8" set up and unfortunately had to buy a whole bunch more hardware ('T's', elbows, connectors and so forth).

Once you get on the other side of the wall, here is a short video of what it looks like on the inside:

A few things have changed since I made that video. The walls are all closed in now, so it weird to watch this since I've come a long way since then. Also, I have added a pressure pump right after the water enters the house. Post pump the water branches off to the heater and cold goes to the rest of the house. The reason I put the pump in was because the pressure was at the bottom end of the spectrum and was in need of a bit of a boost. Works great now. I'll see if I can dig up a picture of the pump somewhere..