It was another brutally long day behind the wheel.  Covered about another 500 miles and have wound up in Erie PA for the night.  I've noticed that the eastern half of the country is more populous than what's West of the Mississippi, which I incidentally crossed yesterday (forgot to mention).  I did have my first brush with the law today and was asked why the trailer had no license plates.  After I provided the full back story the officer was fine with it and said that he "couldn't guarantee" that I wouldn't be pulled over again and be ticketed.  Not a big deal.
I called a storage place near my property to see if I could park the tiny house (I called it a 20' trailer since people don't quite get it unless they see it).  The answer was 'no' but they referred me to another place that said 'yes'.  Will head there tomorrow.  There is another place on route 17 that I always see campers parked at, so will try to find the name of that place too as a backup plan.  Either way it looks like I'll be home tomorrow.  I look forward to seeing my daughter and therefore will leave extra early to get home on time.  Also would like to get rid of truck and get that dropped off.
One thing that struck me as odd is that in the 1000+ miles I have driven I have had to only pay a single toll (just outside of Kansas City for a beautifully maintained stretch of 30 miles or so).  The toll was $4.35.  That's it...1000 miles.  If I drive to Maryland from where I live in NJ, in roughly two hours, the toll for the turnpike is more than 3x that.  East coast is pricey.
The places I've stayed at to sleep have gotten progressively worse.  I'm just happy to have a place that I can pull straight into without needing to do the dreaded truck back up maneuver.  Tonight it's "America's Best Value Inn".  This place is LOW end but just as expensive as the places the last two nights.  May sleep fully clothed.  In their 'Guest Directory" they have the following awesome page: This is one fancy room apparently.  Lots of big ticket items!  If you want to see what a $699 television looks like, this is it: 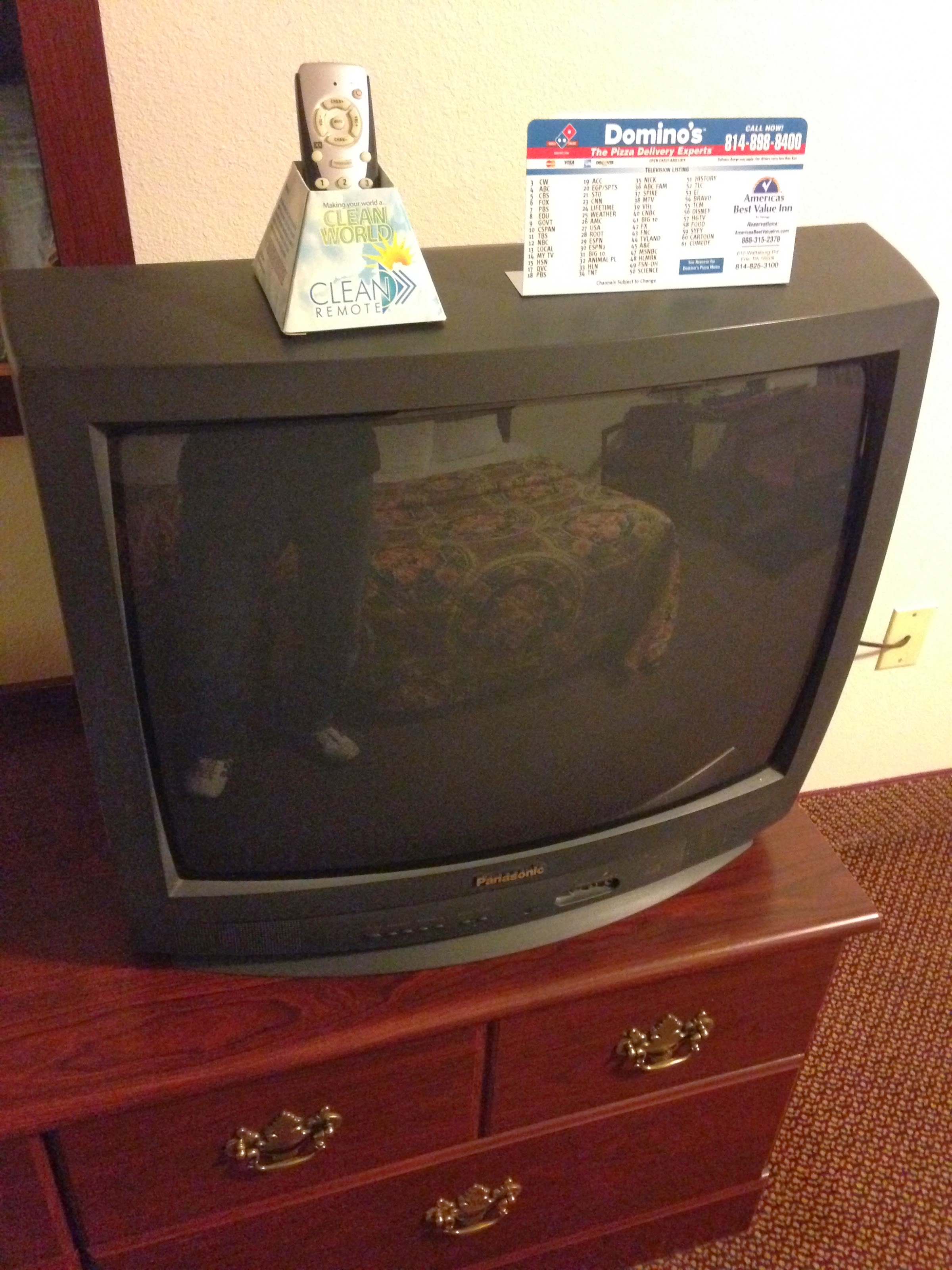 I'll make sure not to take that with me tomorrow morning.

In my exhausted state yesterday, I also forgot to post my lunch on the porch that I had yesterday.  Looking forward to doing this in a place other than a truck stop on the side of the high.  Very enjoyable nonetheless: You come across a lot of strange stuff on the road.  This struck me as odd and somewhat contradictory. Anyway that's it and all I wanted to share today.  Time to sleep.  Good night!