Yesterday was a huge day of accomplishment.  The snow has melted and the ground has had a chance to dry out, so yesterday was deemed to be the day that the tiny house would make it's final 20 mile journey to my land.  The Linden had been at a sketchy mini storage facility for the last two weeks, forcing me to face my inner demons and fertile imagination.  I fully expected the house to either not be there yesterday or have turned into a crack den. Neither option was the case though and the house was there exactly as I had left it.
My truck has been having coolant leakage issues the last few weeks and is not in the best of possible shape but I felt confident enough to give the final move a shot.  Was a bit nervous but that's not necessarily a bad thing.  For starters backing up the truck to line up with the trailer hitch took a bit of effort.  Easier if you have two people to do this but ultimately I managed it.  Trailer had also not sunk into the muddy field in the short time it was there, so I felt pretty confident.  I hooked up the electrical connector, chains and breakaway cable and eased the trailer out of it's spot.  This is what that looked like btw. 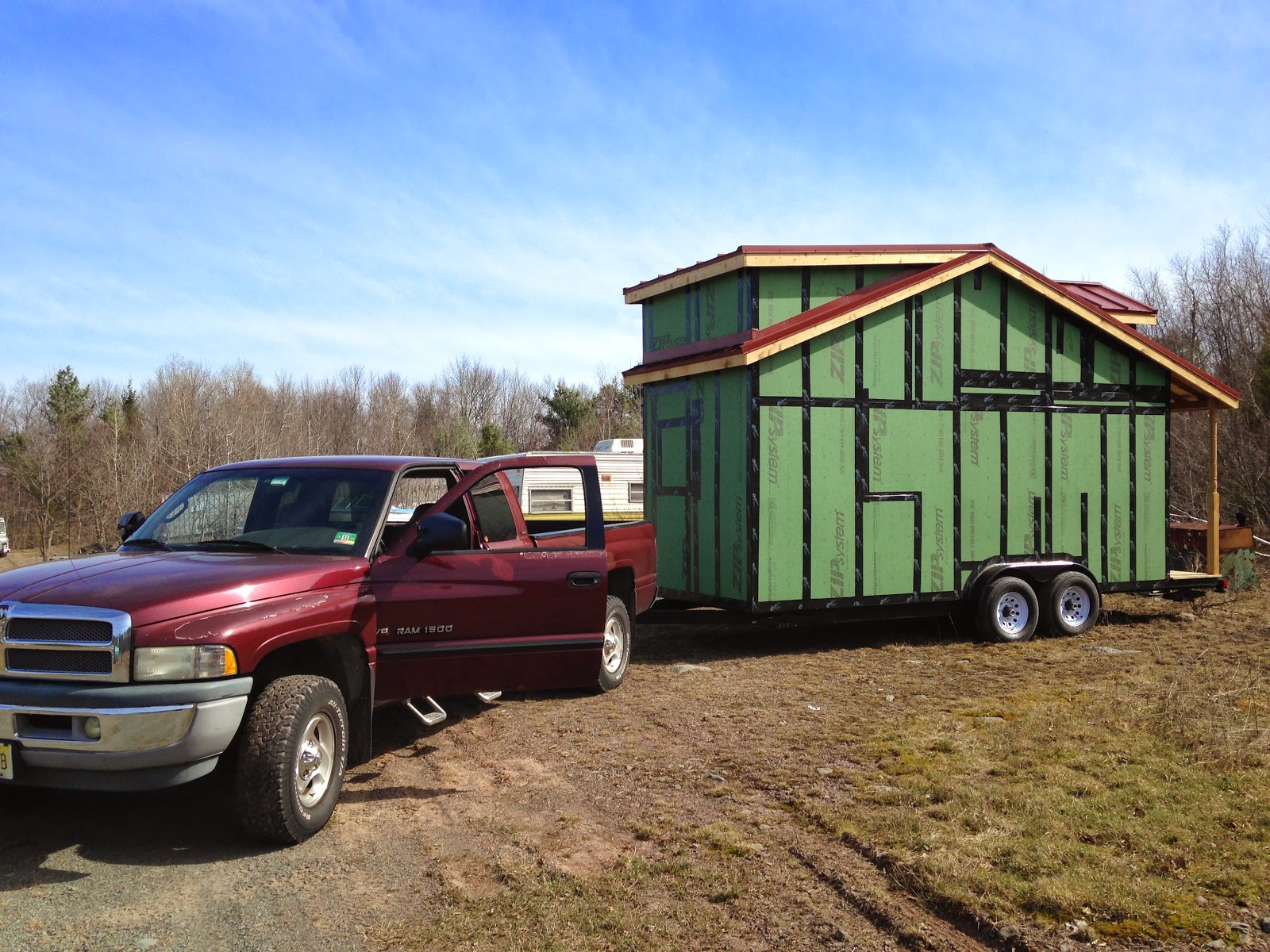 I had kind of planned to stay off the highway since I really wasn't too sure how the truck would tow this.  Truck is rated to 7500lbs. or so but as it turns out the task of towing this house was pretty much at it's limit.  I can't imagine that when additional weight gets added during the build that the truck will ever be able to manage towing this again.  It's pretty hilly up where I am and the truck really struggled to maintain even 40MPH.  Good thing that it has a transmission cooler otherwise I fear I may have cooked that in the process.  I pulled over a few times and there was a mild burnt wire smell emanating from under the hood.  I topped off the coolant and chugged on and ultimately made it to my property.  That looked something like this. 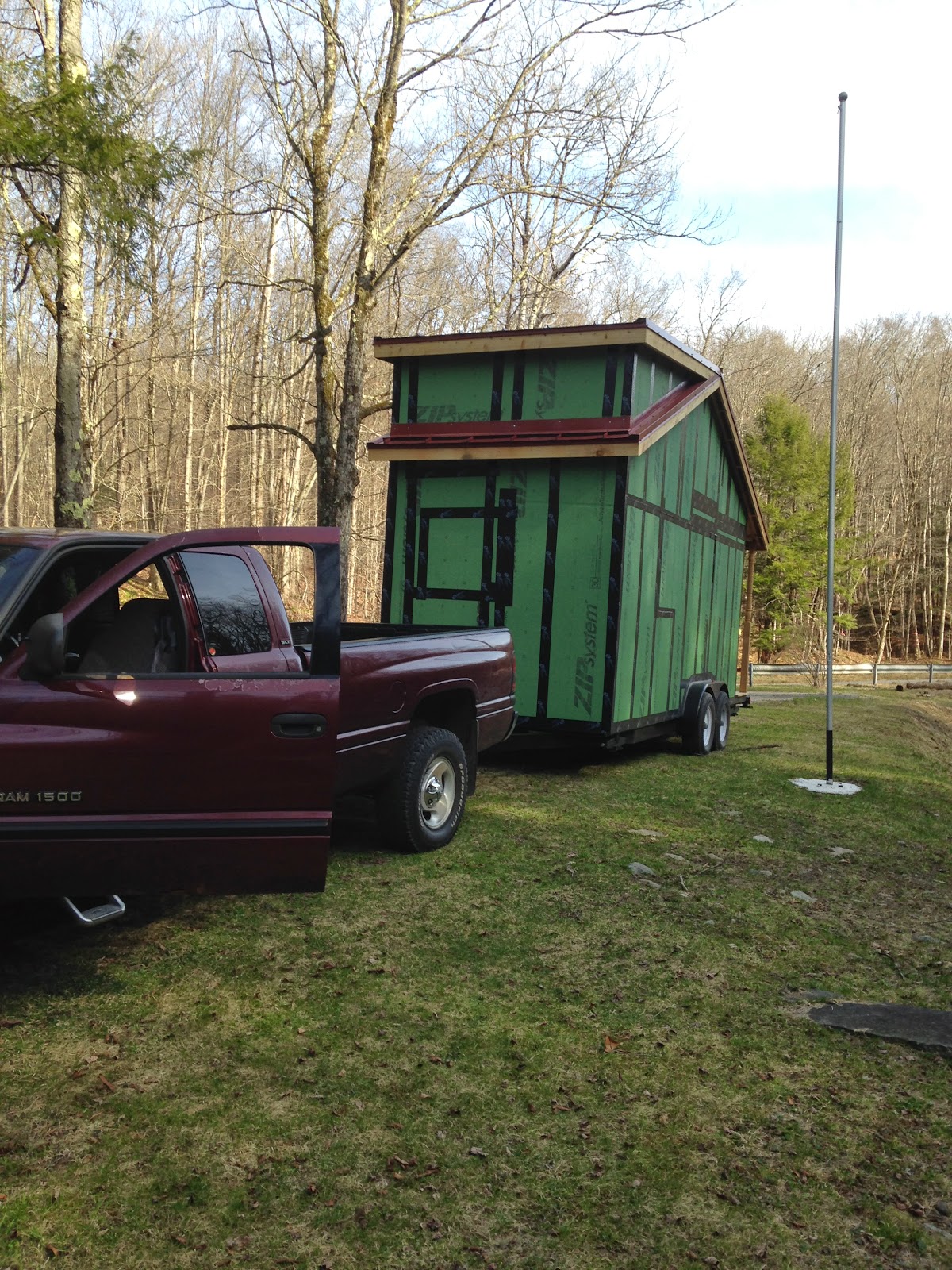 I was happy to have made it there and a feeling of accomplishment washed over me... but, there was one final dubious hurdle to overcome.  The ramp. 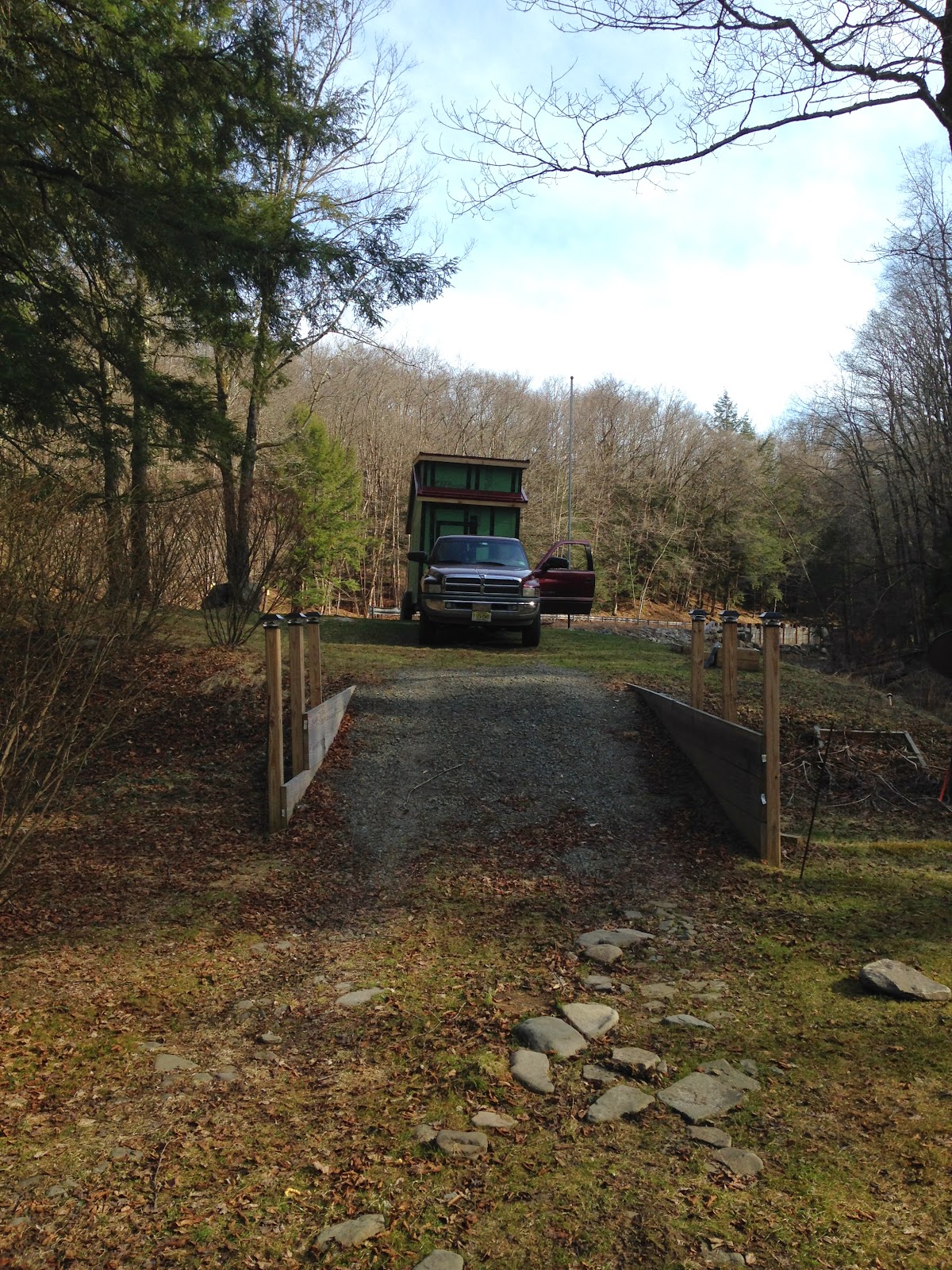 I had already measured the width to make sure it would be able to pass between the post and had a whopping 6 inches on either side to spare.  There was only one attempt possible, so I had to line it up right and hope for the best.  Seemed like a good time to document in video format since the possibility of this going horribly wrong was fairly high.
This was the end result.  Disaster averted.

Apologies by the way for all the vertical use of my phone.  I never seem to remember to hold it horizontally for this sort of stuff.  Anyway, mission accomplished. Looks great where it is.  Dad has booked his flight to come over next month and we'll set up to do some work on this thing.  If we can get the windows in, insulate it and/or get the siding up, that would be a huge accomplishment. For the moment I'm just happy that it's there!